In Search of Green

Posted on February 9, 2015 by lindsayhawdon 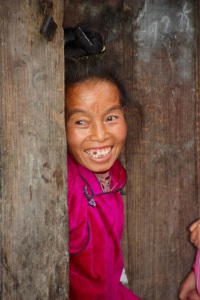 We have come to China in search of celadon green, a mystical glaze that covered the porcelain of the Ming dynasty and Kao Lao the first “one pot” green that came from the buckthorn tree. But it’s a different green altogether that we find in the village of Baigao, a small Mao settlement that clings to the mountain slopes in a land of rain and cloud. There are two things going on in the village when we arrive in search of the embroider Miss Xu. There is the building of a new wooden house and the preparation of a day’s end feast that will be cooked by the roadside in thanks of free labour, and then there is the expectant death of a village elder. The men are gathered in the square, beside a maple tree of burning red. They are sharing a glass bong of tobacco which they draw down into their lungs, exhaling so deeply the smoke all but disappears inside of them. They wear plastic bags wrapped around their heads to ward of the drizzle, and wellies on their bare feet. “The Mao people,” Teddy our guide, tells us as we head down to Miss Xu’s house. “They find a maple tree first, then build a village. There is no village without this tree. When they have a child they plant him this tree. When he dies they make his coffin from it. Then they plant another so his soul will keep growing.” As we head down the steep cobbled steps we pass three men with large sacs flung over their shoulders that squirm and snort. “Pigs for the feast,” Teddy explains as simultaneously clanging bells sound from the water buffalo ploughing in the paddy terraces and Miss Xu pokes her smiling face from out of a nearby door, ushering us inside with rough exuberance. Proudly she displays the embroidery she has made for the soon to be widow of the village elder. A bird in flight. A fire bird, with wings spread wide. Coloured with natural dyes that took her a year to sew. It is the green that draws my eye, a vivid green, that looks far too bright to be natural. “But yes,” she explains. “It comes from the maple leaf.” If she boils it with alum, tea tree or yarrow, it makes this bright green. Then, as if to confirm her proud conviction, fire crackers sound from the slopes above. They crack the air, exploding in bursts like drilling gunfire. The boys look alarmed. “It is the old man,” says Teddy. “He has died.” We head back to the village square together, blinking in the pale green light. The three pigs have been killed, lie gutted and bloody by the side of the road, ready to be cooked and fed to the hungry house builders. The men have laid down their tools, are heading to the house of the deceased. There seems suddenly to be much death around us. “So they’ll cut down his maple tree?” Orly, my youngest son asks. “Yes,” I tell him. “But they’ll plant him another,” he says, looking at the surrounding slops as he does so. They are covered in cascades of changing maples, from red to yellow to brightest green.

The Rainbow Hunters are raising money for War Child (warchild.org.uk) as they travel. War Child work in countries that have been devastated by armed conflict and help children suffering the worst effects of violence; child soldiers, victims of rape and abduction, disabled and street children. They provide vital care to a traumatised child and help them to rebuild their lost childhood. Their aim is a world in which the lives of children are no longer torn apart by war. If you would like to donate something please go to http://www.justgiving.com/Lindsay-Hawdon.

1 Response to In Search of Green