In Search of Red 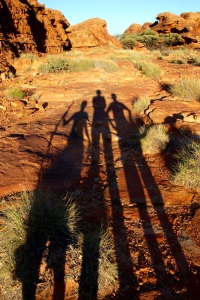 It is dark and cold as we drive in the pre-dawn light towards the great mound of rock, that lies like some sleeping giant in the middle of Australia’s red hearted desert. We can see it silhouetted against the blue black sky, a dark hump, that blocks out the stars and the sinking full moon. We follow the road around to the north side, park the car, and follow the dust track, through the spinifex grasses, to stand and wait for the sun to rise against Uluru.
Three days ago we had found what we had come here for. We had set off west from Alice Springs towards the Mac Donald ranges on a long and empty road into a wilderness of burning orange, had done exactly what you shouldn’t do in the outback of Australia. Had left on the spur of new and momentary information for the red ochre pits. Had told no one where we heading. Had only a small bottle of water, no food. My mobile phone lost its signal five miles out of town. But we drove on, through a red desert of singing cicadas and scattered desert pines, their feathery leaves flickering in a hot wind. We passed the burnt out husks of abandoned cars, discarded tyres hanging from skeleton branches, the odd tin can, warped and bleached of colour, that caught the light and flickered like a false beckon on the parched ground. We passed no other vehicles. We were alone, completely, in the immenseness of Australia’s red centre. My heart pounded as we headed into the heat, further and further from civilisation.
And then 80 miles west of Alice Springs and 8 miles west of Serpent Gorge, in a dried out sandy creek of white and red gum trees we had found the red ochre pits of the MacDonald Ranges. Rusted colours that streaked from sky to ground down the cliff walls of a dried out riverbed; orange, yellow, white and a deep rich red, the colour we had come for. The land around felt ancient and eerie. For centuries these pits have been used by the Aborigines; for ceremonies, for medicine, for war weapons.
“I think we’re being watched,” Orly had whispered. And it had felt like that. A forgotten world of old ghosts, where aboriginal men had once come, like us, in search of the colour red.
And now, here we are at the foot of Uluru, the great rock that sits so silently in the endless surrounding desert, her cave walls painted and still painted to this day with that same red ochre we had found, pictures that depict the Anangu Aborigines throughout the history of time. Here we wait for the sun to rise. Already the horizon is pale. Already the stars have dimmed. And then finally the sun appears like a burning hot metal on the horizon. Uluru, the great sandstone ship of the desert, a sanctity of shade and water, is lit red, a bright shimmering red, the colour of fire.

The Rainbow Hunters are raising money for War Child (warchild.org.uk) as they travel. War Child work in countries that have been devastated by armed conflict and help children suffering the worst effects of violence; child soldiers, victims of rape and abduction, disabled and street children. They provide vital care to a traumatised child and help them to rebuild their lost childhood. Their aim is a world in which the lives of children are no longer torn apart by war.  If you would like to donate something please go to http://www.justgiving.com/Lindsay-Hawdon.

4 Responses to In Search of Red