In Search of Blue 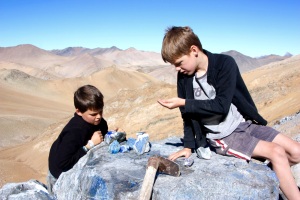 It is still dark when we set out to visit Flores de los Andes, a lapis lazuli mine that lies high in the mountains of Ovalle, central Chile, at an altitude of 4,200m. It is only accessible for three months of the year, February to April, when the snow has melted. The boys are wrapped in blankets in the back of the 4WD. Juan, a miner, accompanies us. He speaks no English, I speak no Spanish. We communicate with exuberant hand movements and tonal inferences. He is a sweet man, short and stout, with a weathered face and watery brown eyes.
Already we have driven from coast to valley floor, and upwards to dusty tracks. The sky lightens when eventually, in the middle of the wilderness, we arrive at a large rusty blue gate. Juan unlocks the heavy padlock and heaves it open. We pass through, steeply climbing up towards the pass. The sun has risen by now, and the alpine meadows rush up to bare pointed peaks. The boys lean out of the window, their faces to the wind. We cross through clear streams of rushing water, filled with leaping salmon, pass mountain goats and herds of wild horses. There is the odd lone gaucho, mounted on a mule, but mostly we are alone.
We climb higher and higher. The land becomes bleached and barren, the track merely a path of crumbled rocks. Finally we come to the top of the pass, the valley from which we have come stretches out behind, and another spreads before us. It is as if we have reached the very roof of the world. My sons are stunned. The air is icy, dry; it’s hard to breathe.
Juan points across to a rickety outbuilding, and beyond that to a small coloured crack nestled into the mountain slope, like a door to Narnia. It is our mine. In this land of bleached browns and whites, it is a bright blue stain. Breathlessly, we head on up by foot. The air smells of sulphur. A huge bolder of ice blocks the entrance. One hundred percent of the lapis in Santiago, used for jewellery and ornaments, is stolen from this mine, by locals who load it onto mules. Rudolf, the owner, opens it only for large commissions. When we had met two days previously he had talked of finding a way to make lapis more commercial, to open it up for the everyman, not just the glitterati.
Juan has brought a sack with him for the boys to collect what they want. Excitedly they pick out the bluest brightest rocks, the colour of the deepest ocean, scattered around our feet. The Italian’s call it oltramarino, meaning “from beyond the seas”. In the past it has coloured the frescos of Giotto, the pastels of Fra Angelico, the painted cloaks of Christ and the veils of the Virgin Mary, ground to the finest powder, in a process that takes over three days of kneading and extracting. It is quite something to stand at the source of such a colour, so close to the sky, you can touch it. It rains up here only once every seven years. But when it does so, the flowers that spring up over the bare slopes of the Flores de los Andes are blue, as if nature itself where leaving a clue as to where we might find one of the world’s most vivid, most precious of colours.

The Rainbow Hunters are raising money for War Child (warchild.org.uk) as they travel. War Child work in countries that have been devastated by armed conflict and help children suffering the worst effects of violence; child soldiers, victims of rape and abduction, disabled and street children. They provide vital care to a traumatised child and help them to rebuild their lost childhood. Their aim is a world in which the lives of children are no longer torn apart by war.
If you would like to donate something please go to http://www.justgiving.com/Lindsay-Hawdon.

1 Response to In Search of Blue